Oh this could be good: Veritas infiltrated a NJ educators union summit
Hmmm...gonna be interesting to see what all they have,

Now, this isn't confirmed but the Supreme Court traditionally doesn't confirm anything at all.  If this is true, I think it's a great thing on both their parts.  Look, it's no secret that I'm not a fan of Kagan's and she's expressed some hostility to gun rights.  So I think it is commendable on her part to actually go and learn about guns.  I also think it's a good thing of Scalia to offer to teach a fellow justice about guns.  Credit where credit's due.

Note that the word "unexpected" isn't even used any more when talking about the subject.

In Honor Of Something Or Other...

Poor Chuck, he obviously needs a Mr. Paul Anka to put some integrity up Keith's ass.

2. Bill O'Reilly makes a remark on The View about how "Muslims killed us."

3. Two old ladies walk off the set of The View.

5. Juan Williams says he's "worried" and "nervous" when people in "Muslim garb" are on a flight that he's on.

6. Williams gets fired from his NPR gig.

Um, why? Is it because one of his goals was censorship? Because he's a fan of political correctness? Nope. Something else happened:

Williams being an embarrassment for NPR makes him a hot commodity for Fox.

And that, right there is the fucking problem, isn't it, Mitch?

You fucked up and admitted the truth, didn't you? Williams said something that lots of people are afraid to say, and Ho-Lee Shit, it got a lot of attention, didn't it?

You're done. At least I hope so. You and your pals can look the other way and hope that the terrorists kill you last, but the rest of us would rather...oh, fuck. I don't even care anymore. Bow down, and see what you get.

Okay Eddie, you won! As some of you might have noticed, Eddie's on occasion made reference to firing up a cigar and smoking it furiously before starting up some of his more epic rants.  Eddie knows his cigars, as many Morons can attest.  Eddie's has been hounding me (okay, not really hounding, but insisting, as any good enthusiast does) in emails and chat that I give Arturo Fuente's Opus X cigars a try for a few months now.  It was kinda a yeah, yeah, I'll get to it kind of thing, given my fairly recent infatuation with smoking pipes, I had other sorts of tobacco-y goodness on my mind. 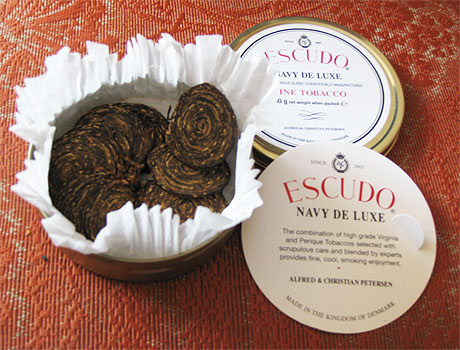 So, anyway, had a friend that'd had a really shitty week, so me and another of our friends decided to treat him to some good grub at a place we knew of.  He's also a cigar guy, so we thought we'd get some kickass cigars for after, visited our local Merchant of Death (no, not a gun shop, the other kind of Merchant of Death).

Stepped into the humidor, took a look around, gave my other friend (he knows what a good cigar is when he's handed one to smoke) some basic pointers as far as choosing cigars, and saw them...Opus X.  Perfect.

And if you're gonna buy a cigar for someone who's had a shitty week, you get a fucking cigar, Double Coronas, accept no substitute. 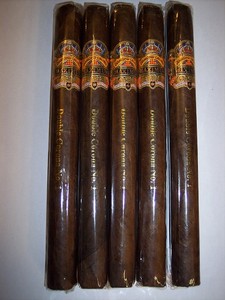 The pic here doesn't do justice, the Double Coronas are big cigars.
Dear God what an amazing friggin' cigar, and were very much enjoyed by all, and definitely gave our friend a needed boost in spirits (bit of Chivas helped on that front too).  Easily the best I've had.  Strong too, I can handle a stout smoke, but my knees were wobbly for a good bit afterword.  Eddie, you were absolutely right, a bit of a bankbreaker, but when you need something special, Opus X is the cigar.  Thanks, Eddie!

Le Tough Guy If you're one of those Tea Party malcontents who don't like the way things are going here in America, this guy thinks you should look to France...

We need to ask the French for a Berlin style airlift to deliver us testicles. The French President Sarkozy suggested raising the retirement age from 60 to 62 and the country erupts into strikes by school teachers, truck drivers, garbage men, air traffic controllers. The trains have stopped, the gas stations are closed they're one step away from Armageddon as Sarkozy sits in Elisa Palace holding his head saying, "Holy Moly!" or whatever the the French equivalent of "Holy Moly!"might be.

"Sacre bleu!" is what French people say, if I've learned anything from cartoons and Pink Panther movies.

Anyway, I'd like to think that Sarkozy's reaction is more along the lines of "Sacre bleu! Do we have enough fucking tear gas to shoot at these bastards?"

Seriously, most of the "protests" I've seen were comprised of teens and twenty-somethings hurling gas canisters back at riot cops.

THE FUTURE IS YOURS!!!

Fun with Fools My new hero.
In Allah's post about Coons running attack ads against O'Donnell is the comment by Key West Reader
Iâ€™ve been polled via telephone 3 times in 2 weeks. And I lie, lie, lie. Iâ€™m a Democrat. Yes, I voted for Obama. I am absolutely going to vote Democratic down the line./These people have no idea.
Okay, that's funny.
I wonder how widespread that is? Teh Peepul are pissed off, that's a nice, easy way to mess with our journalistic and political betters.
Not all the tea partiers can make it to a Tea Party event.

They're what we thought they were In Ace's headlines we see this story about some Dutch Apache pilots refusing to go below 5000 meters (per orders I presume) to help some Australian, US and Afghan soldiers fighting some Taliban. Heavily armed and heavily armored Apaches. you know, Apache gunships designed for close combat support.
Some of the good guys died in the firefight.

Geoff asks, "Are Dutch the new French?" I'm not picking on him, I've seen some others have the same reaction.
Apparently not remembering Sebrenica where Dutch forces sat on their hands during a lovely massacre because of "orders".
Imagine some US Soldiers or Marines obeying those orders.
I don't see them getting those orders, but even if we let them put on Blue Helmets I'd still bet they wouldn't sit there and let people be massacred.

So are they the new French?
I'll let Dennis Green answer that. (for Bears read "The Dutch")

If your life depends on EUniks fighting for you, well, make sure your will is filled out and you're at peace with your maker.

I put this in Fail Britannia because there's no "Fail Florin" (Fail Guilder?) or Fail EUnuchstan categories and I now know what LLAPH means (Thanks Sean!)

LTC vs POS Above the post correction:
I read he was an LTC at Ace's, I chose poorly, he's just got the C with no LT.
It helps if you hear Lebeau saying, "But Coronel..." and think of Moran as Schultz.
Now back to our regularly scheduled post

I was hoping this guy was going to run against Jim, "I Hate Veeshir", Moran this year.
I figured a gay guy would be socially acceptable enough for the hard leftists around me to pull the lever marked (R).
He lost to Patrick Murray.

In an ideal world, Murray is a strong* candidate, but alas, he's a veteran.
A 20 year veteran and officer (LTC) and not just some draftee who was forced into servitude by Bush to make money for his oil buddies.

I haven't seen any "We support our troops when they shoot their officers" bumper stickers around here, but the military people who get on my bus are not looked upon with affection.
They quickly learn to just keep their eyes down so they don't have to see the glares and sneers from their neighbors.

Eh, I gave him money and I'm going to volunteer, but it's mostly just so I can tell AliceH to shut the hell up and not because I think he has a chance.

Update
*I edited "stronger" to "strong" because they're pretty similar.
Neither one likes my "shoot rockets at every third car on the Beltway" solution to traffic but other than that, they're both pretty darn good.

Report Voter Fraud: Thereâ€™s an App for that ElectionJournal is promoting their iOS app for reporting voter fraud, intimidation, or anything that's just downright funky about your polling place.

You may remember EJ for their outstanding reporting about the Black Panther case.

Want to see something pretty? Check out this map.

Election Night 2010 Drunken Chat So, unlike the last several election cycles, this one seems it will provide something to celebrate.  This means we'll be having an open Moron chat hosted right here starting around 7:00 PM on election night (central time, you elitist East Coast pricks).
Make sure you stock up on alcohol because we're doing a shot every time a Republican wins an election.

Moron Guild No one else was volunteering so I purchased a guild charter on the Hellscream server.  Named the guild Army of Morons,.

My character is a Dwarf Hunter named Colgallan.

Bury the Democrats on election day.
I would deplore his eliminationist rhetoric if I wasn't too busy cheering.

What I wouldn't have given for a Radio Flyer with brakes.
I'd probably have a lot fewer scars.


Update: Removed stupid joke about a Yogi like creature because I gotta wonder if that's what invited in the nasty pr0n we've been seeing.

The Hour Is Approaching Yes, the hour when those who have endeavored to ruin the present and future of this country with statist legislation the public opposes is near. The hour of judgment for those who mocked, physically attacked, libeled, slandered, falsely accused, sexually taunted, and generally douched all over us even as we the people voiced our disapproval is at hand. And the hour of judgment for those who have sought to replace the freedom and opportunity woven into the DNA of this country and her people with despair, stagnation, and dependence under the guise of hope and change is at hand.

That's right, lefties, I have something for you:
more...

Lurleen says I'm cute I am so getting a new doctor.
I went yesterday because I've been having a problem breathing when I walk, so he had me disrobe and sit on his table.
When he walked in he just said, "D'Oh!", told me to lay off the doughnuts and beer and walked out.
Then he sent a nurse in to take a pic.

He never did tell me why he just said that. He suggested I show the pic to "Marge" and she could tell me why.
Well, I don't know any "Marge", so maybe I could get some help here. Image below the fold (No, it's not Helen Thomas, I do that one when you're not expecting it).
more...

In lieu of content have this Since I'm in the mood to punch everyone in the throat, have this. It makes me happy.