eddie's been moonlighting As a chef.

We get the best spam Seriously, this thread has some of the best spam ever.  Our spam is more clever than at least one of our three readers.

Old-enfreude A study of old folks discovered that they like reading negative stories about young people for the self-esteem kick it gives their feeble, demented minds.  (via Slashdot)

Also, get off my lawn.

We are bad bad friends We missed alex's birthday yesterday.

I was going to photoshop a birthday cake onto her lap to make this a birthday picture, but why hide fantastic legs?

RIP Leslie, and Fuck Cancer Our beloved co-blogger alexthechick has requested I let our three readers know that her BFF Leslie passed away this morning from Stage IV cancer.  She plans to make a post about this at another time, but right now she is exhausted.

My condolences, and I'm sure everyone else's here at DPUD, go out to you, alex.  It's been obvious for years that Leslie has been a rock in your life.  I know you'll miss her more than any of us can imagine.  I'm certain that I speak for all of us in telling you that if there is anything that any of us can do for you, please don't hesitate to ask.

Is That All You Have? As many of you know by now, about two months ago, my mother was diagnosed with an aggressive and freakazoid strain of breast cancer that was hyper aggressive and resistant to many of the standard methods of combating it. In fact, she had received a pathology report last week that had stated that the cancer, even after surgery, had almost certainly spread to her brain, bones, blood, and vital organs. In essence, she was told she would not be here this time next year.

Needless to say, that was some tough news, but she (along with my father, a man raised by a man who fled on foot at the age of 4 in the 1930s to escape Nazi tyranny, only to fight it a few years later) raised all of us to be humble, thankful for what we have, fight, lead from the front and think of others before yourself, never quit, be fearless, protect those who are weak and small, and give adversity and darkness the prison goatse treatment when confronted with it. So, what did she do? First, she told all of us there will be  no sadness. And secondly, she sought a second opinion and second round of tests from an oncologist trained and mentored at a clinic that is the best in the fucking world.

And what did the second round of tests reveal? Well, she still had cancer, but it had not spread to her vital organs, bones, blood, etc. It was a treatable Stage Three, which means that with radiation and chemotherapy, she will be damn near 99% cancer free come Christmas time. While none of us are naive enough to believe that her treatment will be easy and complication free, she is upbeat, ready, and willing to do what is necessary to have her natural hair back come this time next year. And this news was the best news we could have heard, especially my fat and overprotective ass, especially as Mother's Day approaches. 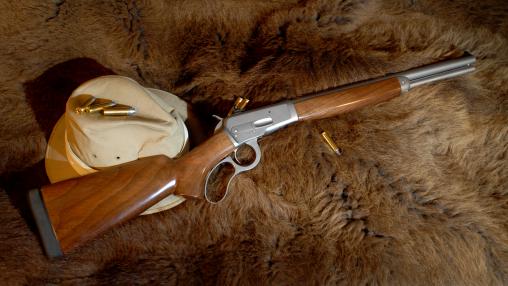 Dammit, DPUD sent me a link to that beauty, an American made, .500 S&W lever action.
Man oh man is that hot, I might have to cancel the Uberti I ordered months ago and change to that beauty. I'd have to decide 18 or 22", but that's a good decision to wrestle with.
I love rifle/pistol combos, mostly from my early reading of Zane Grey.

If I had a lever action/revolver in .500 S&W there wouldn't be anything more for me to get except fully auto.

Once I get that pair I no longer have a dilemma as to what to grab when the Russians invade.
I'm going APC hunting.

Don't forget BAG-Day is Thursday, email pics to veeshir at the hotmail place.
Can you tell it's my favorite blog holiday?

BAG Day's Coming BAG Day's coming on Thursday so here's a taste of BAG-Days past. 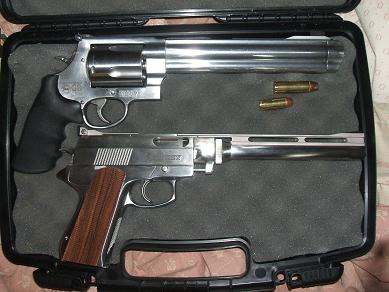 I'm going to the tax-day tea party but I can't find a schedule, unless the only affair is starting at nearly 6pm.
I'm still planning on putting up the BAG Day post early, so send me pics to veeshir at the hotmail place with BAG day as the subject by either Wednesday night or early Thursday.

All Your Racist Flags Are Belong To Us! That's right, racist Christian Teabaggers! I, Charles Foster Johnson and my Super Awesome Correlator Tool To Catch Nazis and Criticsâ„¢ (Patent Pending) have taken over this hotbed of racism, teabagging, and hate. Hold on!

Ok! Where was I? Oh yeah! When I am not chasing Nazis and Bigots on the internet 20 hours a day, I am busy determining if your flag is indeed a secretly coded symbol for white power. So, come on down! Bring your flags to me, and I will personally determine if that flag with George Washington on it really is a coded White Power Slaveholding Revanchist logo, or the flag for the state of Washington. Ask me if violent threats are hidden in the strangest places. Ask me if this is a front for a Belgian Fascist Group, or something else. And ask me if the Teabaggers have set up their own shadow militia, based on their symbols.

And if you challenge me, I will ban you from the internet! For only I know the truth, as told to me after a three day binge of sleeplessness, SQL server fun, cheetos, and bannings. But only after I force you to buy a calender, a comic book, and a kindle from my shop.

So, now that Iceweasel and I have a site for nothing but flag symbology, please go back to my old site to tell me how awesome I am, how cute Andrew Sullivan and I look together, how mean everybody else on the internet is, and why Sarah Palin is the devil incarnate. And leave the racist hunting to me, a professional.

Oh, and just for good measure, by reading this post, you are banned.

Please don't sue us. Oh crap, the products of one of our best advertisers, cheap ugg boots, are apparently crippling the wearers.
Quote
He said: "As the foot slides around, you get wear and tear on the joints on the inside of the foot. The ankle is in the wrong position, the thigh bone also changes position, and you get an abnormal movement in the pelvis, which leads to back problems."

Those girls can't sue us, can they? I mean, they just advertise here, we never really endorsed the product.
Well, maybe alex. She's always going on about shoes.
Which leads us to wonder if she can sue herself.
If she is, indeed, a woman.

And no, I didn't see this on Ace's sidebar.
Well, maybe a little.

Heh, well, totally missed that milestone We had our half-millionth visitor about, oh, roughly 50K visitors ago.  In any case, thanks again to all our cobloggers and all six of our readers.

The Weasel Store is Open for Bidness Everybody's favorite mustelid is selling T-shirts.  Store is here.  I expect great things from the creator of Zombie Reagan.

Okay, fiddled with some settings Let me know if our crapblog starts giving you any issues, loading slow or whatever.

So, we should be getting a bit of a reprieve from the spam Which is good, because that was getting aggravating.

Chris Matthews Just Got A Tingle Why?

Because MSNBC has found its new business model:

In one murder after another, the Canal Livre TV show had an uncanny knack for being first on the scene, gathering graphic footage of the victim.

Too uncanny, say police, who are investigating the show's host, state legislator Wallace Souza, on suspicion of commissioning at least five of the murders to boost his ratings and prove his claim that Brazil's Amazon region is awash in violent crime.

"The order to execute always came from the legislator and his son, who then alerted the TV crews to get to the scene before the police," state police intelligence chief Thomaz Vasconcelos charged in an interview with The Associated Press.

The killings, he said, "appear to have been committed to get rid of his rivals and increase the audience of the TV show."

Sadly, I doubt even that could meaningfully improve their ratings.  After all, he's been blowing the President for a year and that hasn't helped.

On behalf of everyone here at DPUD, I would like to apologize for Vinty's inappropriate, tasteless, and regrettable blog post earlier today.  (link is NSFW and should not be viewed by children, the elderly, or pregnant women; DPUD accepts no responsibility for blindness or ED caused by viewing this link).

While DPUD and the rest of the gang are busy beating the stuffing out of Vinty, I've been assigned the task of adding a palate cleanser for you.  So here you go!  A woman who merits inclusion in the Hill's list in at least 8th place, and is more attractive than the chiseled arms of Michelle Obama.

Uh-oh Yes, that's right, DPUD lives up to his moron status and gave me the keys.
Big mistake/ahnuld voice

So, DPUD told me if I joined up I would get to see the pics that prove that alexthechick is really a chick. So who has them? Please don't tell me it's moronpundit or Alice H. I've been kinda rude to them lately.

Spreading myself thin For some reason, PJ Mama decided to give me the keys to The H2 last night, so I'll be annoying people with retarded poats like this one over there occasionally from now on.

Anybody Know If Compos Was In The Bay Area Recently?

Then we would have an explanation for the vandalism of portable toilets in San Francisco.

No one has been hurt, but the blazes have caused about 45,000 dollars in damage to the portable outhouses and surrounding property, forcing police and fire officials to step up nightly potty patrols.

The fire department's arson task force is investigating, and it's unclear whether just one person is setting the fires.

San Francisco Fire Department spokeswoman Mindy Talmadge said Thursday that there have been no eyewitnesses. The blazes have been set inside and outside outhouses, including some that were locked.

"Who knows what motivates people?" she said.

One More Reason To Avoid Door To Door Sales Reps

That's it! After this, I'm firing a warning shot at anybody and everybody who rings my doorbell.

The victim told investigators the doorbell to her home in the 700 block of Beach Court rang, and she saw a red Jeep Cherokee blocking the driveway. However, she didn't recognize the vehicle, so she didn't answer the door.

A friend stopped by shortly afterward and told her a "human bowel movement" sat on the porch, describing the odor as "repugnant." Toilet paper also was on the porch "where the suspect attempted to clean themselves."

The victim told police a neighbor indicated a heavy-set woman drove off in the red Jeep and that she was selling Mary Kay products.

The victim told investigators the smell was "overwhelming and she had to clean it as soon as possible."