The Walking Dead premier Dude, that was awesome, I'm really excited to see where the series goes...no, haven't read the comics it's based off of.  BTW, no spoilers for a while, I know Alice hasn't had a chance to watch yet, and I'm sure one of our three readers hasn't watched either.

Halloween at the H House The zombie needs a name...

In honor of the upcoming Empuddening

"I don't understand" Robo-bama gets an economic lesson. Via Jonah Goldberg. Not safe for work.

The view from the Ivory Tower Normally, I don't link NYT columnistsâ€”especially not Paul Krugmanâ€”but this piece of shit is such an amazing example of the lack of self-awareness displayed by people living in the MFM bubble that it belongs in a museum, where future generations can laugh at study it.

Barring a huge upset, Republicans will take control of at least one house of Congress next week. How worried should we be by that prospect?

Not very, say some pundits. After all, the last time Republicans controlled Congress while a Democrat lived in the White House was the period from the beginning of 1995 to the end of 2000. And people remember that era as a good time, a time of rapid job creation and responsible budgets. Can we hope for a similar experience now?

No, we canâ€™t. This is going to be terrible. In fact, future historians will probably look back at the 2010 election as a catastrophe for America, one that condemned the nation to years of political chaos and economic weakness.

Um, could you remind me again which party has had control of the legislative branch of our federal government since the 2006 midterms? I guess there wasn't a whole lot of "political chaos" there, except for the fact that once they really got rolling, they had to pass their major wet-dream legislation through kickbacks and backroom deals, shady procedural maneuvers that nobody had ever heard of, and votes under the cover of darkness, but, hey, I guess shit that you kind of liked got done.

As for economic weakness under a Republican-dominated opposition to Obama's policies, well, you're the Nobel Prize-winning genius who has a column in the NYT and the rest of us don't have jobs, so I guess we'll just have to defer to your superior wisdom. In the mean time, we'll be out collecting bottles and cans.

Krugman goes on to lambaste the poopy-pants Republicans of the mid-90s for the whole government shutdown thing, which was, arguably, bad for both sides. However, he starts that argument with the following:

In the late-1990s, Republicans and Democrats were able to work together on some issues. President Obama seems to believe that the same thing can happen again today. In a recent interview with National Journal, he sounded a conciliatory note, saying that Democrats need to have an â€œappropriate sense of humility,â€ and that he would â€œspend more time building consensus.â€ Good luck with that.

Krugman goes on to talk about how fucking outrageous (my spin on how I think he views it) Mitch McConnell's focus on making sure that Obama is a one-term president (HORRORS! No political party has ever worked to this end!) and then writes one of the goddamn stupidest fucking things ever printed in the history of recent punditry:

True, Mr. McConnell did say that he might be willing to work with Mr. Obama in certain circumstances â€” namely, if heâ€™s willing to do a â€œClintonian back flip,â€ taking positions that would find more support among Republicans than in his own party. Of course, this would actually hurt Mr. Obamaâ€™s chances of re-election â€” but thatâ€™s the point.

As someone recently said to Obama himself: "Dude." The reason anyone other than Krugman, who's seemingly giving himself a visual prostate exam here, would mention a "Clintonian back flip" is that it fucking worked for Clinton. In fact, if McConnell actually suggested it, he's kind of fucking up on that whole "one-term" thing.

Bill Clinton ran as a moderate and then tried to ram a Big Government, leftist agenda down America's throat, and subsequently faced a massive backlash. What did he do? He moved toward the center, and got re-elected. Hey, fancy that.

Barry and Krugman both have Nobels. I once got four gold stars on a crayon drawing of a horsey, and my mom put it up on the fridge. I leave it up to you to determine which is the greater honor.

Is this something? It goes without saying (or, in this case, typing) that I don't trust anything the Dems do as being on the up-and-up, but I just can't figure out what's going on here...

The Democratic National Committee has asked the Pentagon to provide records of correspondence between the Army and nine potential challengers to President Obama in 2012, Fox News has confirmed, giving a unique glimpse of part of what appears to be the Democrats' opposition research strategy.

ABC News first reported an internal Army e-mail that indicates the DNC filed Freedom of Information Act requests for "any and all records of communication" between military agencies and Sarah Palin, Mitt Romney, Haley Barbour, Tim Pawlenty, Newt Gingrich, John Thune, Mitch Daniels and Bobby Jindal, all of whom are considering campaigning for the White House.

Does anyone have any theories about why they're doing this? I mean, they must have some kind of angle, or they wouldn't bother, but I just don't get it.

Rush Hannity, Come on Down! WRKO in Bastin is having a contest for the Next Great Political Blogger!!!!!!
They don't say you need to be a New English blogger, but I bet that would help. They're kinda parochial around those pahts.

Not sure if anybody here is interested but there it is. You send them your best political post (not poat, I'll explain later) and they'll do stuff after that and then you win a temporary job they claim is worth $5k, you'll have to pay taxes on it.

Why no poats?
Contest rules
Entries must not contain any indecency, profanity, or obscenity as determined by Station in its sole discretion....

eddiebear should probably just root for someone else too.

Via Jay G at Marooned.
Don't tell him I told you. He's trying to win and he's at least as well armed as I am and maybe even a little better armed.
Eh, I have high-cap mags, I'll get him while he's reloading. 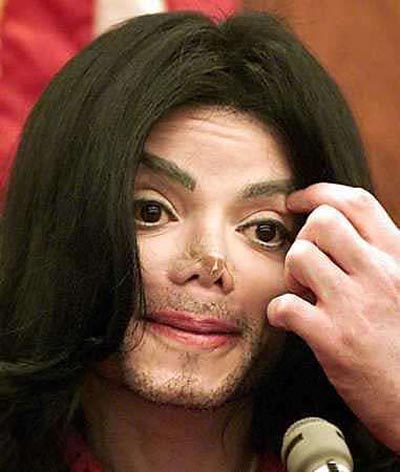 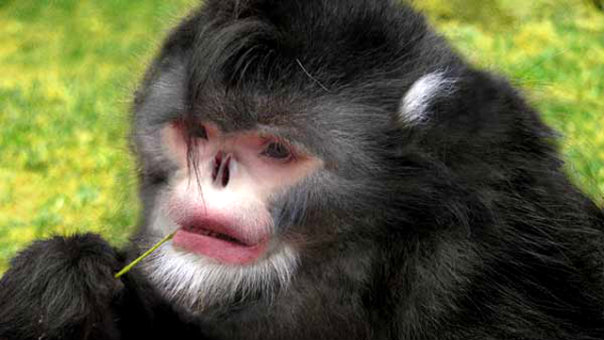 You maniacs!  You blew it up!

There's no such thing as liberal media bias Nope. Not at all. There's no such donkey animal. I'm totally sure that the juxtaposition of photographs at the top of this Politico article on the Nevada Senate race regarding alleged dirty deeds from the Reid campaign is just a coincidence...

How is this a lie, Markos? Kos thinks the idea that one would go to jail for not buying health insurance under Obamacare is a lie. Sorry, that ain't gonna fly. It's true that jail isn't the first remedy. Those not complying would first face fines or taxes (whichever is the politically or Constitutionally "in" term of the day). 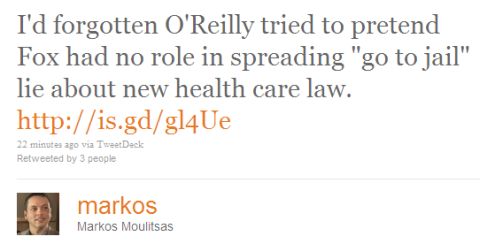 What happens when you don't pay taxes or fines?

You go to jail.

The ultimate cost of noncompliance with any government edict is eventual imprisonment. If you don't pay your parking tickets, you'll eventually be behind bars.  Why would Obamacare be different?

Love Him or Hate Him It's Allah's wit I always loved (particularly in the old days):

.
I laughed out loud.

Sigh Really? Are you guys (by which I mean the MFM) still trying to prop this pathetic thing up?

A progressive infusion in US politics, the Coffee Party is brewing a strong counter-movement to the ultra-conservative Tea Party, just a week ahead of the US legislative elections.

Born in January in reaction to the bashing President Barack Obama's proposed health care reform was getting in Congress and the media, the Coffee Party first took shape on Facebook.

I'm not going to even bother to quote any more of the article, which mainly quotes leftist activist Annabel Park talking about how many Facebook friends she has.

One More Week Fuck the left. Dungeonfuck them so hard with the detachable cock from a sodomizing zombie that they will grow a new appendange as a result. Fuck them for everything. Fuck their smugness. Fuck their arrogance. And megafuck them to infinity because I just plain old fucking hate them.

They have beaten us up, mocked us, lied to us, slandered us, humiliated us, ruined our future, and sneered condescendingly to us that they know better, and that we should just shut the fuck up and take it prison style and ask for more.

Besides, in my sick, depraved heart, I fucking want to see them wailing and moaning. I fucking want to see them shocked and appalled that the fucking people stood up and told them to get rotofucked with a sewer snake. And I just like electorally curbstomping them. The American people have been fucked over by the left and their RINO enablers. Now, on November 2, we fuck back.  We fuck them. We make them our bitches. And we discard them like a dirty fuckrag.

So get lubed up, lefties. Get lubed up to have a new orifice created from what the freedomcock of victory will do to you.

I'm in Walmart So I was in Walmart when I heard the Old Spice whistle. This is caused a Pavlovian head whip and then I saw these on the in store displays. There may have been squealing, I admit nothing. 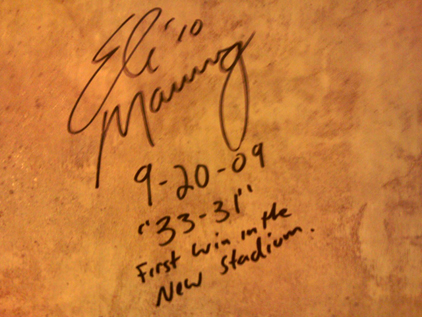 My congresscritter hates me Sigh.
So I spent the late afternoon and early evening making calls for Patrick Murray.
I know the sample is small, but I'm not very optimistic.

It's not as if I'm surprised but I'm a little disappointed.
I'm an optimist by nature, it's just life that's made me a pessimist.

My first call I screwed up. My second was no better, but the third. Ahhhh, that lovely third call.
"I'm not voting for Moron".
Made my night it did. Too bad any more were few and far between.
Update
No, I don't know how that symbol thing got in this post.

Praise the prof and pass the bong Puppy Blender link about the higher ed bubble.
I'm not discussing if there is a higher ed bubble*, I'm just talking about this the pic at the link.
Written on the pic is:
"Four years for a BS with honors6 years for a Ph.DNow, I work 70 hours a week for $30KIt just wasn't worth it. I want my 20s back"

If you're working 70 hours for $30k I'm gonna guess neither your BS nor your master's nor your Ph.D required any math and since you don't say J.D, you're not being abused by a law firm.

But that's not the point.

Waaaaaahhhhhh.
You partied your ass off for your 20s on your parent's dime and loans.

You didn't want to go out into the "real world" so you kept going for your Ph.D in 12th century French poetry or Linguistics of the Patriarchy and now have to work your butt off teaching English at a community college or something.

In other words, you partied your ass off and got some useless degrees and now you're mad?
Color me totally uncaring.

*I would suggest there is one for high-dollar schools.
I went to state schools when I went back so my student loan payments are around $130/month.
And that only because I didn't feel like working full time+ the last  two years, I had no loans for the first two years, no sleep, but no loans.
I tutored for pocket money and let loans pay my $350/month rent and pot of stew every week for the last two years in Fucking Utica.

Oh this could be good: Veritas infiltrated a NJ educators union summit
Hmmm...gonna be interesting to see what all they have,