This Just In From The No Fucking Shit Department Spanking is not bad for children.

So this is a perfect opportunity to answer a very simple question: are kids who’ve never been spanked any better off, long term?

Gunnoe’s summary is blunt: “I didn’t find that in my data.”

But wait, it gets better.  It turns out that not spanking your children is actually bad for them:

But Gunnoe went further. She also looked at many good outcomes we might want for our teens, such as academic rank, volunteer work, college aspirations, hope for the future, and confidence in their ability to earn a living when they grow up. Studies of corporal punishment almost never look at good outcomes, but Gunnoe wanted to really tease out the differences in these kids.

What she discovered was another shocker: those who’d been spanked just when they were young—ages 2 to 6—were doing a little better as teenagers than those who’d never been spanked. On almost every measure.

P.S. - My female cobloggers should feel free to comment often about spanking using lots of action words.  The inclusion of stompyboots in the anecdotes is good for bonus points.

WTF is wrong with Nebraska?
If you're going to give your viewers lawn tips from a severed head that's been attached to a a mower, could you at least make sure that it doesn't have such a douchey haircut?

Zombie frogs Tastes just like chicken.  Except I've never seen chicken dance around after it's dead.

Let the woman driver bashing begin This is what happens when a country's not afraid to offend half its population.  Un-PC as it may be to say so, I'd love to have an extra three feet of parking space due to a "different sense of distance".  Pink and purple, not so much.

Random religious crap I haven't had my first cuppa yet, so no cleverosity to go along with these, sorry.

While Jesus is bruising a banana peel, Allah is burning a small child.

The Vatican likes The Simpsons.

Obama skipped church on Christmas. Maybe they don't have a branch of TUCC on Oahu.

Expelled Okay, its time for Nigeria to have a time out.  How about, nobody from that country gets to leave, especially on international airplanes, or send any electronic signals for a month.

Oh, delicious schadenfreude I swear, schadenfreude tastes like bacon and Grey Goose and chocolate all rolled into one. Hmmm, that might be a good dish...

The parents in the "Balloon Boy" ruse have been hit with a tab of $42,000 from local, state and federal agencies for their October stunt that briefly left many fearing for the fate of their 6-year-old, their lawyer said Monday.

I wish we could slap each and every reality star wanna-be with a $42,000 fine.  Idiots would have to seriously consider whether they're going to reap a profit before faux-sending their kid into space or crashing the White House.

A Christmas Gift To the conservatives who sat out the last presidential election because there was no difference between McCain and Obama or to teach those G.O.P. fat cats a lesson and also to those "smart" people like Althouse and McCardle who should have fucking known better...
more...

Is this the ghost of America's future?

Like other heavily indebted nations around the world, Ireland is borrowing vast sums from foreign investors to plug its budget deficit. Fearing that the country will buckle under the weight of so much debt, the Irish have an answer: Put the government on a diet.

More than $4 billion in cuts coming into effect after New Year's Day will slash salaries for 400,000 government workers while making painful reductions in benefits for such groups as widows and single mothers to the blind and disabled children. A tax targeting rich Irish nationals living overseas — dubbed the "Bono Tax" in the Irish press — will help restock empty coffers at home. Even Prime Minister Brian Cowen, who earns about as much as President Obama, is taking a 20 percent pay cut.

Such drastic steps have put Ireland on the front lines of a global battle against runaway government spending and exploding budget deficits in the wake of the financial crisis. The world's richest nations, according to the Organization for Economic Cooperation and Development, are more indebted than at any time in at least the past 50 years.

Call me crazy if you will, but isn't this the kind of shit that the real conservatives have been saying about the American budget?  That we should stop spending, cut where we can, and through that simple process, work on lowering the deficit?  I mean, great for Ireland, but how can the author of this article even question if this is the future of America?

It has to be the future of America.  The Dems have to raise the limit on our credit to keep spending their way into oblivion; Obama has the balls to say that he's going to reduce the deficit by waving a magic wand while riding a unicorn; and they keep spending our money like it's nothing.

I'm going to pull a little bit of an Eddie here.  Wish me luck.

Let's address the important issue But will it play Crysis?

Because I wish it were Christmas Eve Except that I'm not done with my daughter's dollhouse. Ever wished that a deadline would be here so you could be done, except that if the deadline were here your head would be spinning around like the little girl from The Exorcist because you're not done?

Because I wish it were Friday And because Luc Besson could have done so much more with Mathilda in Léon.

Tell me she wasn't on drugs Just try. 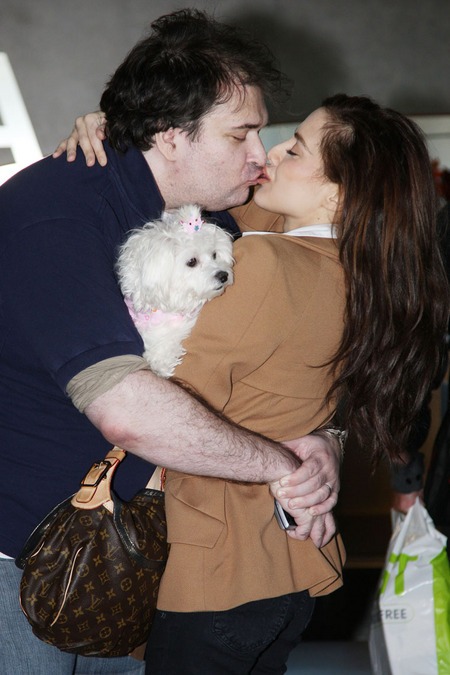 (pic swiped from The Superficial)

One after another we sat across from my poor sister and tried to be funny or sarcastic, or both. “Gnomes playing patty-cake!” one of my brothers said; when my sister rotated the card, as per psychiatric practice, the image became a vagina. “Batman!” he would say; then “vagina.” This brother reported the same finding for every single image: cartoon figures right side up; female genitalia upside down.

I absolutely understand how someone could find this offensive.

And yet, I can't stop giggling.

A California neighborhood reportedly is up in arms after a resident decorated his lawn with a depiction of Jesus shooting Santa Claus.

The controversial Christmas display shows Jesus pointing a double-barrel shotgun at Santa's dead body as Rudolph lays sprawled across the hood of a pickup truck nearby, WNCT reported.

Neighbors in Nipomo, Calif., called for the display to be removed, but its maker Ron Lake called it a work of art — in which Santa represents the commercialization of Christmas, the station reported.

"It's an expression of my repressed creativity," Lake told WNCT.

Police said that because Lake built the display on private property they cannot force him to take it down. Some residents plan to start a petition, the station reported.

Future Moronblogger? Four year old grabs himself a beer, breaks into his neighbors house and tries to steal their Christmas presents.

Google Suggestion Hilarity Type in "why are" into Google and you get some pretty hilarious results in the top ten.

My personal favorite is "why are there school."

You'll shoot your...uh...yeah I'm one of those people who still loves "A Christmas Story" in spite of the way that it's become the equivalent of my generation's "It's a Wonderful Life," airing nearly nonstop this time of year.

Virgin Media's newspaper advert for the program "Dating in the Dark" included the text: "How do you spot a ginger in the dark?"

Virgin said the premise of the show was to challenge people's perception of attractiveness and to encourage decisions based on personality as well as looks.

However the Advertising Standards Authority (ASA) agreed with three complainants that the ad was likely to cause serious offence and should not be used again.

"We considered the text was likely to be interpreted ... as a statement that reflected a choice between looks and personality ... being a suggestion that people with ginger hair were unattractive," the ASA said in a statement.

"We considered the ad was unlikely to be interpreted to be light-hearted in tone and was instead likely to be seen as prejudicial against people with ginger hair."

Other adverts in the series used to promote the show had included the tagline: "When the lights come on I just hope I haven't been kissing Shrek."

On Tuesday, Britain's biggest retailer Tesco apologized and said it had withdrawn a Christmas card which showed a child with red hair sitting on the lap of Santa Claus under the banner: "Santa loves all kids. Even ginger ones."