Rush Hannity, Come on Down! WRKO in Bastin is having a contest for the Next Great Political Blogger!!!!!!
They don't say you need to be a New English blogger, but I bet that would help. They're kinda parochial around those pahts.

Not sure if anybody here is interested but there it is. You send them your best political post (not poat, I'll explain later) and they'll do stuff after that and then you win a temporary job they claim is worth $5k, you'll have to pay taxes on it.

Why no poats?
Contest rules
Entries must not contain any indecency, profanity, or obscenity as determined by Station in its sole discretion....

eddiebear should probably just root for someone else too.

Via Jay G at Marooned.
Don't tell him I told you. He's trying to win and he's at least as well armed as I am and maybe even a little better armed.
Eh, I have high-cap mags, I'll get him while he's reloading.

Love Him or Hate Him It's Allah's wit I always loved (particularly in the old days):

.
I laughed out loud.

Poor Chuck, he obviously needs a Mr. Paul Anka to put some integrity up Keith's ass.

Surely I'm going to Hell I saw on Twitter someone say their kid is coming down with "Bieber Fever"...first thing that came to mind,

Round the 'Tubes Shit edition Shithead Dem appointed judge who donated to the Dem in the race orders GOP candidate's divorce records unsealed a week before the election and then recuses self. Click for who to help.

Shit! We were so close to my ideal way for this end of civilization to actually finish. A 20 ft asteroid missed the Earth by 28,000 miles on Tuesday. If it had hit just right, that wouldn't have totally screwed things up, just made them more....fluid for a year or two. Sort of an interplanetary "reset" button.

Actually, I agree. Dems are very intimidated by being voted out of office

I'd hack it Russian exchange student busted for setting up bogus passports and bank accounts to funnel millions of dollars collected from trojans and malware.  She does have the crazy eye...but yeah, would still hack it.

Its Getting Harder To Admire The President I eagerly await Iowahawk's rebuttal.

Everybody sing along As you've probably heard, Kaley Cuoco broke her leg in a horseback riding accident. The cast and crew of The Big Bang Theory filmed a message for her.

Apparently Penny's being turned into a bartender for a while to hide her cast. I thought they'd written it in to the script during the virtual presence episode. I almost wish they'd gone the How I Met Your Mother route, where they hid two characters' pregnancies without really hiding them by giving them ridiculously oversized purses that fooled nobody.

Jeff Goldstein has been dealing with this leftist, deranged stalker for years now, she's been arrested at least twice, there is at least one restraining order and yet, she still goes after him with apparent impunity. I had figured the story was over, it's not. She's still just as vile and deranged.

After reading that you'll understand why she's named SWWNBN.
She's like Candyman except you don't have to say her name three times to get her to show up.

Yes, I'm fascinated with burning houses Let's take the discussion about Chubb (yes, I said Chubb) Insurance's policies a bit further, shall we? (Note that we're discussing the policies - I'm aware that this isn't Chubb.)

A Tennessee man watched in horror last week as flames consumed his house. Also watching? The local subscription-based fire department. The man had not paid his $75 firefighting fee, so the firemen would not lift a finger or a hose.

Only after the fire spread to his neighbor's field would the firemen even respond to his 911 calls. Once there, they only put out the field fire as his house continued to burn to a crisp. His neighbor had paid his firefighting fee.

"I thought they'd come out and put it out, even if you hadn't paid your $75, but I was wrong," the hapless homeowner told reporters.

The man offered to pay them the fee right then and there, or however much it took to get them to put out the fire, but was refused. The man lives in a county that has no fire protection. The nearby town offers fire protection to non-residents on a per-contract basis.

I'm loving the sense of entitlement, both from the idiot who's all "Oh, I'll pay your $75 now that my house is actually ON FUCKING FIRE," and from the commenters over at Consumerist that are all "Grow some compassion and be human, you privatizing Rethuglickans!"  It's almost as if we should expect services we aren't actually willing to pay for.

Speaking of college admissions (kind of):

I went and saw "Waiting for Superman" yesterday. If you haven't seen this movie you really need to grab a liberal friend and go see it. I admit that there is some of the usual liberal B.S., that should be expected, the director is the same guy who did "An Inconvenient Truth", but after a slow first 15 minutes it turns into one of the most devastating critiques of the education unions I have ever seen. And, amazingly enough, the film actually refers to the Democratic party as "a wholly owned subsidiary of the teacher's unions".

The one area I think most conservatives will have some issues is an advocacy of national standards and national funding, but the advocacy isn't particulary strong.

I hope when it comes out on DVD the producer includes some follow-ups on what has happened with the main characters.

He asks the question
So is this an example of over-weening paternalism? Or is it a responsible limitation on government assistance?

I say the first, considering who are asking, but that doesn't mean it's wrong.
I have a different question.
My opinion is that gov't needs to keep people from killing me, hurting me or taking my stuff. That's about it.
So welfare benefits are none of those three. However, we've decided that we should help poor people.
As a pragmatic person, I can accept that. I think we've gone too far and it should be temporary, difficult and annoying, but I can see it as a necessity.

So, as a libertarianish person, should I be in favor of restricting their free drink rights or against?

On the one hand, it's none of the govt's business what I eat or drink.

On the other hand, they're paying for it, shouldn't they be able to attach conditions?

As I said, I think it's not the govt's job to take care of you when you can't (except that we've decided it is, extra-Constitutionally IMO), but I've also said that I think if we're going to do welfare, it should be difficult and annoying, this makes it both.

The only reason I'm not totally for it is the nagging feeling that I'm arguing over how to do something instead of whether we should do it.
That is a trap I try to avoid.

Post delayed because my favorite scene from Pteradactly was on. The hot bleach-blonde going swimming in her undies, almost being eaten by a pteradactyl and then leered at by the guy she runs screaming to. Full of silicon, peroxide, bad special effects, bad acting and hilarious. What makes Sci-fi movies so great.

Messing around in paint.net Jinx is having a t-shirt design contest so I decide to make a submission. It took a little while in paint.net but I think it has a certain comic bookje nais se quoi je ne sais quoi (hey French is an incomprehensible dead language I can't be expected to spell it right the first time): Porter! Yuengling's Amber Lager is the workhorse of their lineup. Go just about anywhere in Pennsylvania and order a "lager", and you'll be handed a Yuengling Lager. But their Porter is really the under appreciated jewel of their offerings.

Finally, somebody at the company decided that it was time to tell the world about Porter. Are you porter-worthy?

Dark Brewed Yuengling Porter is a special tribute for those who have carried a heavy load, picked up extra work or gone out of their way to help.

That could be you, or someone you know. Each month, we'll select a different "Porter Worthy Person of the Month" based on the nominations you send us. Those selected will have their story told here on PorterWorthy.com and will win a limited edition Yuengling Porter hand-signed by Dick Yuengling.

Now that all the major US breweries have been merged with or been bought out by foreign companies (Miller --> SABMiller, Coors --> MolsonCoors, Anheuser-Busch --> AB/Inbev), I'm pretty sure Boston Beer (aka Sam Adams) is the largest domestic brewer. And right after that, (I'm pretty sure) is Yuengling.  If they can ramp up Porter sales a little bit they'll overtake Sam Adams in no time despite being a regional brand.

That's all I got.  What a bunch of stupid fucktards. 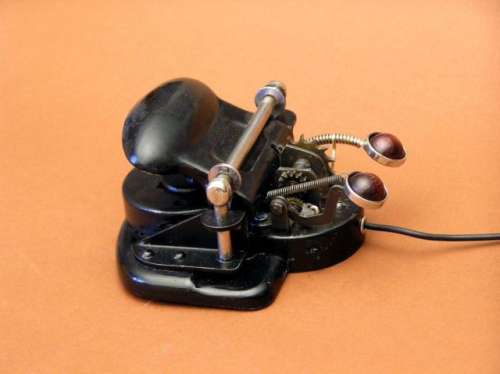 Something else that doesn't really thrill me, but that's a pretty cool mouse and I know some of the people who look at the pictures here like that stuff.
The USB thumb drive is pretty cool too.
Here's the guy's site. I think he's in Zagreb, Croatia.