Banned in Boston This new rule raises a number of important questions.  For instance, how do you enforce it?  Whatever happened to the age-old tradition of a necktie or sock tied around the doorknob?  And, most importantly, what if he or she likes to watch?

Uh, this is NSFW I know it looks like it is, but trust me, it isn't. Safe for work, I mean. And it probably won't be appreciated by anyone without children of preschool age.

Courtesy of Taste Like Crazy, who says we're going to hell for laughing at this.

Save the Boobs Each and every fundraising group ever should learn from the effectiveness of this ad.

AoS lifestyle tip, Colorado edition If you're going to get all liquored up on Val-U-Rite and then go homicidally joyriding, Grand County is the place to do it.  If you get an average sentence, you won't even spend a month in jail.

This just needs to be abused.  Where's that pic of eddie or Rosetta?

Stupid question of the day Yeah, I'm thinking this is going to be a regular feature.

Is anyone else heartbroken that Sarah Michelle Gellar didn't name her new baby Buffy?

When will these outrages end?

Awesome! The POTUS Stands Up For And With Israel Whoops. Wrong POTUS.

Of course, the current one won't.

Stupid question time Why am I not hearing anyone floating John Bolton for president in 2012?

Inflicted on you by WarmingGlow.

I hate when he does that. Eric at Classical Values seems, to me, to write the stuff I would write if I were a better writer and a less cynical, less blood-thirsty person.
Other times, he writes stuff that scares the crap out of me because he is a less cynical, less blood-thirsty person than I.
Like this.
He meanders around noting scary stuff that could be considered unrelated but he relates together in a chilling way. Chilling because I'm sure that Obama is committed to losing in Afghanistan.
He talks about us not showing resolve and the likely results.

I remember the Vietnam War quite well, and I think these people are losing sight of the fact that there is a major difference between that war, and the current war. Neither the North Vietnamese Army nor the Vietcong had any interest in fighting Americans here in their own land. Vietnam was literally "over there." So, even though our resolve was uncertain, Vietnamese combatants never came over here and waged war on Americans.

I expect stuff like that out of Ace or The Emperor, when Eric does it it's downright scary.
RTWT.

Season premiere of House is tonight 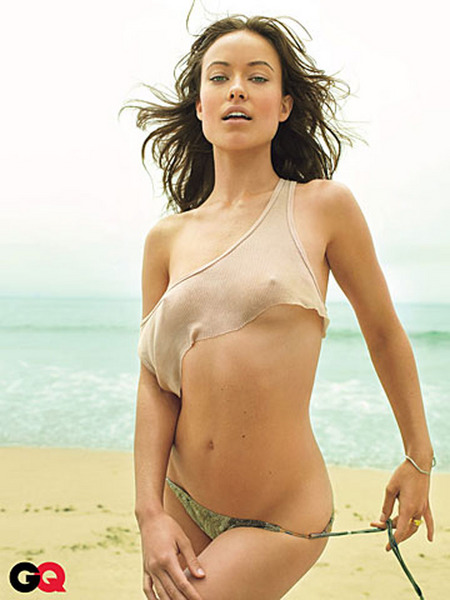 gratuitous excuse to post a pic of Olivia Wilde.  You can thank me with chocolate and alcohol and Doc Martens gift certificates.

Stupid question time So Alec Baldwin won an Emmy last night.  Does this mean that the voters agree with him calling his daughter a thoughtless little pig, or does it mean that the voters are finally realizing that absolutely nothing that comes out of an actor's mouth outside of his roles should be considered as anything but insanity?

Moron Pundit's NFL Power Rankings I've decided that the talking heads on TV are on crack when it comes to who's great and who's not.  For example, they selected the Packers and the Eagles to be in the NFC Championship Game this year before the season started and that was and is just fucking ridiculous.

So, here is my list of the best NFL teams after week 2 (I know I'm doing this before the Monday Night Game but nothing that could happen in that game will move either of those teams for me.)

Bonus points for the person that lodges the most humorous disagreement.
more...

In other news, it appears I'll be losing by high double digits again in the FF league.  Why do the guys I play always score over 100?

No more turkey stuffing? How about cousin stuffing? Soon Holland will just be for drug addicts.
The Dutch Justice Minister Hirsch Ballin is considering the best way to ban animal pornography. It's currently legal here in the Netherlands, as is sex with animals and a way to ban both is now being sought.

Fascist bastids.
And to add insult to injury, they're also trying to ban marriage between cousins. They claim it's because of imported brides from Morocco and Turkey, but we all know it's an assault on the Ace O' Spades lifestyle.
If I can't screw my cousin or my animals? Who am I gonna screw?

Edited to get rid of some stray, html thingy.

HALO ODST Trailer - The way Starship Troopers should have been

Can someone please bitchslap Paul Verhoeven. Smack around the crappy actors while you are at it.

Russ Feingold The junior Senator from my home state has made the news a couple of times in surprising ways recently.  First, he was willing to oppose Cap and Tax if Wisconsin was unfairly burdened by it (it would be) and now he's joined the Anti-Czar chorus.  Well, maybe not the anti-czar chorus but definitely the not-anti-anti-czar chorus.

This reminds me that I've been meaning to say something about Russ Feingold for a while.

Don't get me wrong, I disagree with him  99% of the time and don't even get me started on that ridiculous McCain-Feingold bullshit*.  Just, he's something you don't see nearly enough of in politics:  genuine.

No matter how vehemently you disagree with the man, you know what he's promoting and saying is his honest, deep opinion.  He doesn't bullshit people and he doesn't angle for political advantage (generally).  Sure, he's about as far to the left as you can be in American politics without being labelled a communist but guess what, he's not a communist.  Unlike many liberals who try more moderate approaches to ease us toward their socialist goals, he isn't anything more extreme than he appears to be.

I guess what I'm saying is, if we had more like him on both sides of the aisle we'd be a lot better off.  I'd rather have a bunch of people I know I disagree with tell it to me straight than a bunch of lying bastards I think I agree with blow smoke up my ass.

* - Of course, TWO OTHER BRANCHES OF GOVERNMENT were supposed to stop that travesty from going into effect but didn't because... I don't know, they were retarded that day.