Good Riddance? At least some of the noisier Japanese want us gone.
My question, do we need to stay in Okinawa?
We have bases in South Korea and Taiwan in that region. They need us, Japan doesn't.

Japan can defend themselves and nobody really wants to invade them anyway. The original reason we stayed was because we didn't trust the Japanese, but these days they are too into fucking robots, marrying cartoon characters and generally leading the world in "weird and creepy" to want to invade anybody else. They mostly want the world to leave them alone except to buy their stuff.
Their biggest threat is the poofy-haired maniac lobbing missiles, and we have cruisers and whatnot for that and they can field their missile defense. They're probably helping us and the Israelis build the systems anyway.

It seems to me there's no reason not to be out of western Europe and Japan. They don't need us and those bases cost us money. We can keep those soldiers in places where they're needed.

Don't forget the three laws Via the Puppy Blender we see the Slashdot article linking to this page that's an open access summary of an experiment into robot evolution and this page that discusses the first page and has vids of the experiments.
Very cool. Read the whole thing, you'll enjoy it.

I don't really understand how the researchers recombine the robots' "genomes" to make "generations", but they do so I'll let it slide.
What they did was let robots run around doing stuff, the ones who did what they wanted best "reproduced", they kept going until the populations were stable, in other words, didn't learn anymore (except once).

For instance, they told robots to run around longer than their batteries could handle with the instructions on how to recharge, so they had to go home periodically.
After 100 generations they all went back with 10% power left, that didn't change at 200 generations. They obviously developed a Murphy's law.

It never stabilized.
Which makes them uniquely like people I think, these guys must be on the right track.

It seems to me that animals stabilize how they get their prey and how they avoid their predators, that's why new predators or prey can destroy an eco-system.
Man is the animal that best evolves its strategery in killing. It seems to stabilize, but then someone figures out a better way to do it an off we go. That's how empires are founded, like the Romans or the Greeks before them. Not many animals do that and none do it nearly as well.

Interesting and, I also think, important if they can evolve an intelligent robot.

We know lots of stuff, but not a lot of people know a lot about a lot of stuff and nobody can know everything we know all at once.
A brilliant physicist doesn't know all that a brilliant astronomer does and neither of them know what a brilliant mathematician knows.

Asimov, I think, wrote science-fictionally about how a lot of advances were made very quickly simply because a thinking machine could know lots of stuff and correlate it to do unexpected stuff.
That would be cool. If we could make reasoning computers they could figure out important stuff, like how to shut up a global warmmonger or  make the perfect s'mores.

Related, excellent sci-fi books, Code of the Lifemaker and The Two Faces of Tomorrow, both by James Hogan, he's hit and miss, but those two are excellent about evolutionary robotics.
Related Video below the fold, because I'm supposed to.
more...

Quote of the Day "Diplomacy is the art of saying 'Nice doggie' until you can find a rock." - Will Rogers

No one I have contracted for has ever bought me hookers... What's up with that?

Israeli software distributor EIM is suing Microsoft over a terminated contract. Microsoft claims the contract was terminated due to filing fraudulent sales reports, but EIM says the real reason was that EIM representatives refused to take part in a sex and drug party aboard a cruise put together by Microsoft for Turkish and Israeli distributors. EIM claims that there were women who would perform sexual services in attendance, as well as some "illegal substances," and EIM representatives were encouraged to partake of both, though they refused.

Right... because every eleventy bazillion dollar software company bases it's business decisions on who wil and won't do coke and have sex with hookers. 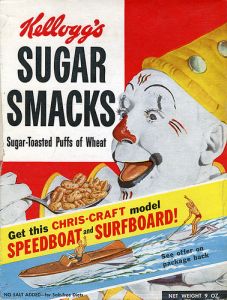 Check out a bunch of defunct cereals like C3PO's, Ice Cream Cones, and Crazy Cow here.

Andrew Sullivan Is Stupid Well, at least the people he quotes (Begala) are but the quote is an unspoken endorsement in this case:

What the fuck are you talking about?  You mean to tell me that the only reason the Republicans obliterated the Democrats in 1994 is because they didn't pass their wildly unpopular healthcare bill?

You need a fucking helmet.

Fake Steve Jobs Unimpressed by iPad Language warning - some F-bombs dropped in this video...
(via theappleblog.com)

Ok, so it's a big iPhone. Or a color Kindle that does other stuff. [Yawn]

I've really enjoyed listening to her on Scariest Places on Earth. She definitely knew how to bring the creep.

State of the Union

Investigative Journalists are Douchebags Even if they're on your side.

Sometimes that's easy to forget in the heat of a moment but always remains true.

Yeesh.  What the FUCK was he thinking?

Also, him being a moron doesn't invalidate the fact that ACORN is a 100% criminal enterprise.  It just shows that journalism often is as well.

TMI MF Because I'm not really a nice person.

The tape, say both our sources, is explicit and reveals that Mr X "is physically very striking, in a certain area. Everyone who sees it says 'whoa'. She's behind the camera at first."

"So who is Mr X and accomplice?" you ask?
You shouldn't have, you'll regret it.
Sources have told us that, in the throes of their affair, John Edwards and Rielle Hunter  made a sex tape that contains "several sex acts."

I just hope you've all eaten already.
I have to admit, if I didn't have to see him having sex, I'd love to watch him having sex.
I wonder if he positions a mirror so he can watch himself. I'd also like to know if he combs his hair during sex. I mean, I'm sure he does if he's getting a hummer, but does he when doing the deed or does he tell the woman to keep her damn hands off his hair?
Blame Althouse.

Palate cleanser/apology below the fold
more...

"I'm good…now," he says. "Now my penis is fantastic! One hundred percent recovered. Put me back in the game, Coach."

Um, what kind of game are you playing that involves your peen?

On second thought, I'd rather not know.

Random thought I was going to put together a SOTU drinking game but I'm afraid even we Morons would get alcohol poisoning within 5 minutes.

What's Boeing up to That they need UCLA to offer a special restricted class in Spacecraft Structure Design and Analysis.

No location for the course is given but I bet it's Area 51.  Somebody get Jesse Ventura on this fast.

Quote of the Day
"I always wanted to be somebody, but I should have been more specific." - Jane Wagner

Fox Buys Rights To Torchwood As good as The Office?  I won't hold my breath but I will hope.

Also, an American spinoff of Dr. Who?  Does that mean the Doctor may appear on American television?  No way.

Haiti I watched the 60 minutes special on Haiti last night and I don't have much to say after watching a front-loader scoop corpses into a truck like in Soylent Green.

I don't know how that country can ever recover.  It seems almost certain that Haiti as it has been is gone and a new country will have to rise up and take its place.

It seems to be a slow day, so you know what that means... Busty Blonde Russians singing pop music no one understands:


Send cash in lieu of thanks.